To share your memory on the wall of Lew Smith, sign in using one of the following options:

Lew Selman Smith was born in Stillwater, Oklahoma on December 20, 1931 to the late Joe Selman Smith & Muzette (Yoakum) Smith. He passed from this life in Grove, Oklahoma on October 14, 2019 at the age of 87 years, 9 months, & 24 days. Lew was raised & educated in Drumright & was a 1949 graduate of Drumright High School. After graduating from high school, he attended Oklahoma A. & M. in Stillwater. He then joined the United States Navy & served on the USS Cavalier during the Korean War. While still in the Navy, he married Dona Scott on July 17, 1953. He was discharged from the Navy in 1954 & they made their home in Drumright. Lew had worked as an auto mechanic & body repairman. He owned & operated Smith Body Shop in Drumright for many years until his retirement. His greatest passion was building & restoring cars for show. He was a member of the LA Roadster Club, the Tulsa Roadster Club, & the Tri-5 Chevy Club. He considered these his greatest life achievements & in his own favorite words, the rest is only “Bull Crap”. In addition to his parents, he was preceded in death by a BROTHER: Terry Smith.

To send flowers to the family or plant a tree in memory of Lew Selman Smith, please visit our Heartfelt Sympathies Store.

We encourage you to share your most beloved memories of Lew here, so that the family and other loved ones can always see it. You can upload cherished photographs, or share your favorite stories, and can even comment on those shared by others. 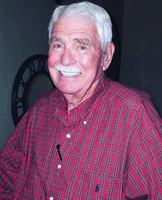